Unfortunately, crime is a fact of life many people face on a daily basis. Burglaries, thefts, assaults and even murder are incredibly common. According to recent data from the Arizona Department of Public Safety, criminal acts occur on a highly consistent basis in the state. Below, you will find the most recent data on crime in the state of Arizona. 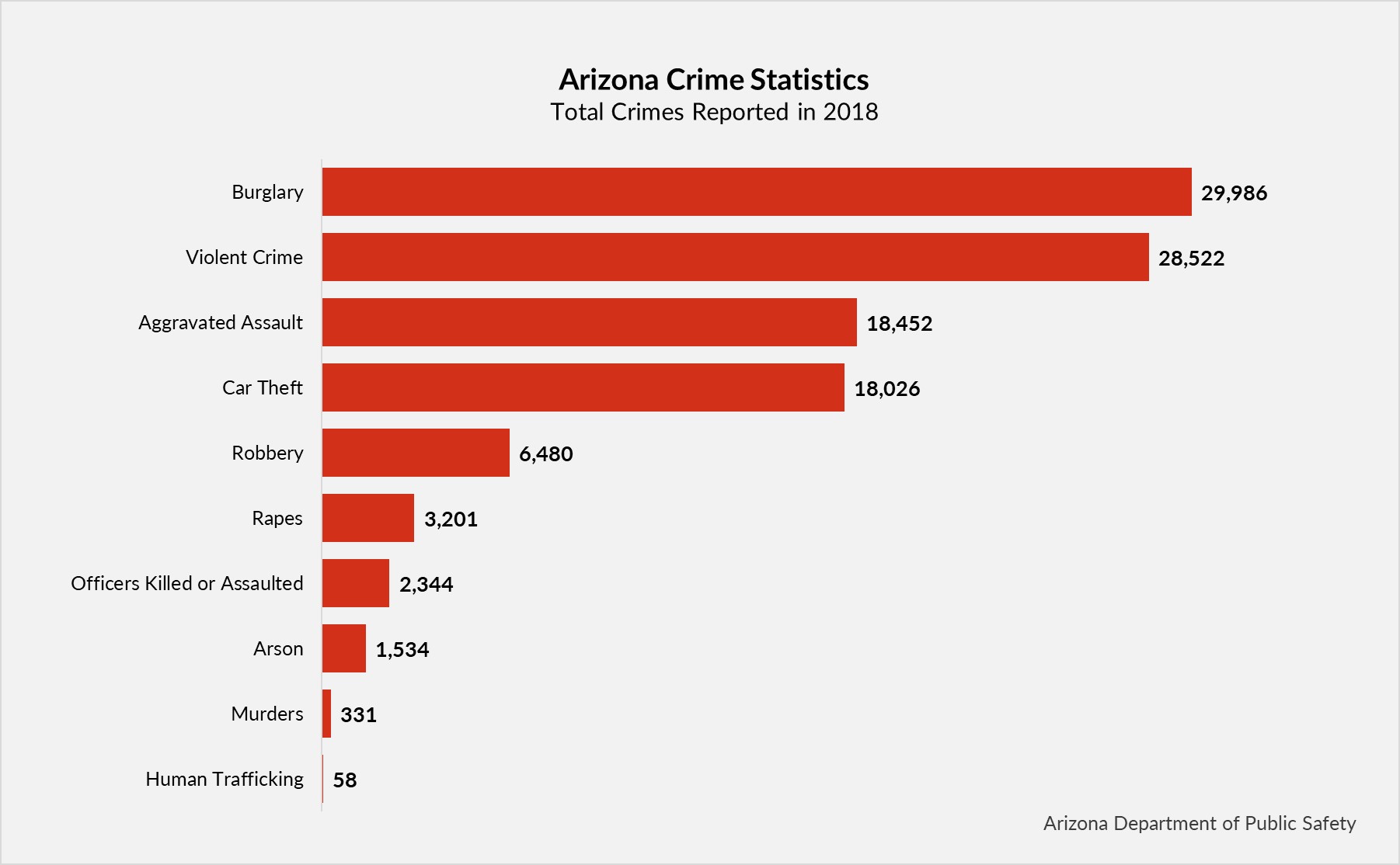 Use these links to jump to that section of the page:

2 Violent crimes accounted for 13.4% of the total Crime Index.

3 April had the highest amount of violent crimes with 2,701 offenses

4 December had the least amount of violent crimes with 2,082 offenses

5 The most incidents of violent crime were aggravated assault, with 18,452 reported offenses.

12 Murder accounted for 15% of all offenses and 1% of total violent crimes.

13 January saw the highest number of murders with 39, while September recorded the lowest with 14.

14 Sundays had the highest amount of murders with 68, while Wednesday had the lowest with 37 murders on average.

17 Firearms (including handguns, rifles, shotguns, etc.) were used in 64% of the murders.

19 15 Juveniles were arrested for murder.

Rape is defined as any penetration of the vagina or anus with any body part or object, or oral penetration by a sex organ of another person, without the consent of the victim. Rape of a minor, otherwise known as statutory rape, is not included in this data.

23 Rape accounted for 11% of violent crimes committed in Arizona.

24 January had the highest number of rapes reported with 312, while December had the least with 210.

26 65 of those arrests were Juveniles.

29 January had the highest number of robberies with 608, while June had the least robberies reported with 475.

30 Robberies occurring on highways (streets, alleys, and sidewalks) recorded the highest number, with 2,015 or 28% of all robberies.

33 Firearms represented the most common weapon used in 2,654 robberies or 41%.

Aggravated assault is defined as one person attacking another with the intention of inflicting severe bodily injury. This type of assault usually is accompanied by the use of a weapon or by other means likely to cause fatal injury or great bodily harm.

36 April had the highest amount of reported aggravated assaults corded with 1,811, while December had the lowest with 1,270.

37 Physical weapons (hands, fists, feet) were used in 30% of aggravated assaults and firearms were used in 28%.

39 Burglary accounted for 16% of property crimes throughout the state.

49 Locally stolen vehicles were recovered 93% of the time.

51 Arson accounts for less than 1% of all property crimes in Arizona.

52 March had the highest number of reports with 215, while September and October recorded the lowest with 52.

54 Motor vehicle arson was the most common form of arson, with 164 cases.

56 Of the reported crimes, 391 people were arrested.

* Commercial Sex Acts are defined as “Inducing a person by force, fraud, or coercion to participate in commercial sex acts, or in which the person induced to perform such act(s) has not attained 18 years of age.”
** Involuntary Servitude is defined “The obtaining of a person(s) through recruitment, harboring, transportation, or provision, and subjecting such people by force, fraud, or coercion into involuntary servitude, peonage, debt bondage, or slavery (not to include commercial sex acts).”

65 The highest number of assaults, 673, or 28.8%, occurred when officers were responding to disturbance calls.

67 The highest number of arrests were related to driving under the influence. DUI offenses made up 8.8% of the total, with 22,675 cases.

If you or someone you love has been charged with a crime in Arizona, please contact our Phoenix Criminal Defense Attorneys at AZ Defenders. Our dedicated criminal lawyers have decades of expertise to help you through your case and protect you from conviction.