If you have been arrested for assault or aggravated assault in Scottsdale, hiring an attorney is imperative. The Scottsdale assault lawyers at AZ Defenders provide outstanding criminal defense and exceptional customer service. We can help if you are facing misdemeanor assault, aggravated assault, felony assault or other assault-related criminal charges. We provide free initial case consultations and are available to take your call 24/7.

Why Choose Our Law Firm?
Assault Vs. Aggravated Assault
Potential Penalties for Assault in Scottsdale
How Our Attorney Can Help
Cost of a Scottsdale Assault Defense Attorney Cost
Speak to a Lawyer Today 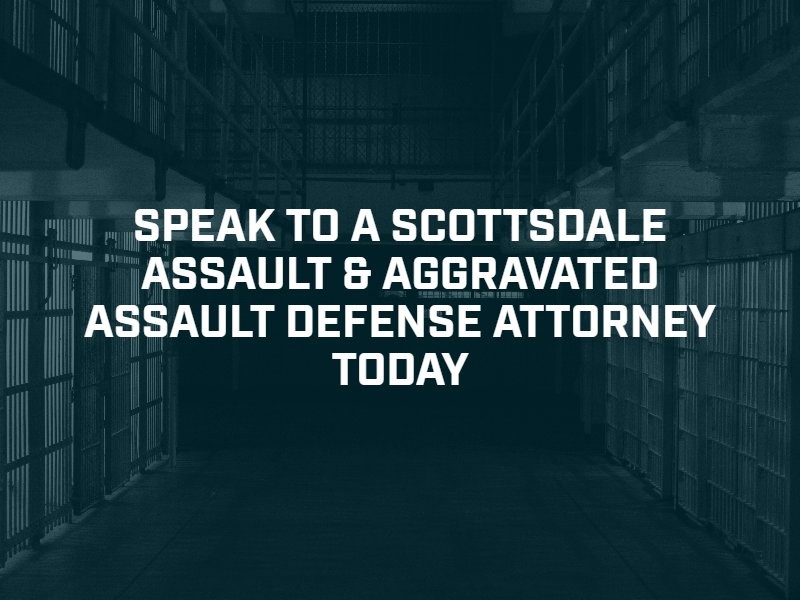 Why Choose Our Firm for a Scottsdale Assault Case?

What Is the Difference Between Assault & Aggravated Assault?

Under this definition, many types of actions can constitute assault in Scottsdale, such as:

Assault charges are often connected to fights or altercations in Arizona. Aggravated assault (A.R.S. 13-1204) includes the same definition of assault but with aggravating circumstances, meaning a situation that makes the crime more severe in nature. In Arizona, aggravated assault can be charged if the assault involves:

Aggravated assault is a more serious crime than simple assault and is penalized more heavily. If you are facing either type of assault charge, however, it is important to hire a defense lawyer in Scottsdale to advocate for your rights. Hiring an attorney from the very beginning of your case allows them to take early action to defend you and minimize the penalties that you face.

Potential Penalties for Assault in Scottsdale

If an individual is found guilty of the crime of assault in Scottsdale, a judge will order a sentence. The sentence will depend in part on how the crime is charged. Simple assault that does not involve any injuries, for example, may be charged as a misdemeanor, while aggravated assault is charged as a felony. Below are the potential penalties for different classifications of assault in Scottsdale:

Assault sentencing guidelines are established by state law. The final sentence, however, is determined by a judge based on the unique circumstances. Factors that may be taken into consideration include the nature and severity of the crime, the seriousness of the victim’s injuries or harm, and the defendant’s criminal history. With one or more prior assault convictions, expect greater penalties.

How Our Scottsdale Assault & Aggravated Assault Lawyer Can Help

If you or a loved one has been arrested for an alleged assault or aggravated assault crime, hiring a Scottsdale defense attorney is one of the best things that you can do to protect yourself and your future. Assistance from a violent crimes defense attorney in Scottsdale can help you build the strongest possible defense for your specific case – potentially protecting you from substantial penalties. Common defenses to assault charges include wrong defendant, self-defense, defense of others and insufficient evidence.

At AZ Defenders, our lawyers are well-versed in Arizona’s assault laws. We can help you in many ways during the legal process, including explaining the charges that have been brought against you, listing your legal options, carefully investigating the incident, searching for evidence of police misconduct or entrapment, helping you build a defense or establish an alibi, and representing you during an assault criminal trial in Scottsdale. Whether you find yourself facing assault charges or require a Scottsdale firearms crimes defense attorney, we will stand by your side every step of the way.

How Much Does a Scottsdale Assault Defense Attorney Cost?

The cost of an assault or aggravated assault criminal defense attorney depends on the law firm and the specifics of your case. The average cost of a criminal defense lawyer in Scottsdale is about $8,000, with prices ranging from $1,000 to $15,000 in Maricopa County. If a lawyer charges an hourly rate, expect it to be around $100 to $300 per hour, plus a retainer (typically around $2,000). Find out how much your case might cost during a free consultation at AZ Defenders. Compared to the cost of a misdemeanor or felony assault conviction, paying for your lawyer can be well worth the price.

You do not have to face assault or aggravated assault criminal charges alone. Hire the Scottsdale assault defense lawyers at AZ Defenders so that you can focus on living your life and building your future while your lawyer works hard to have the charges against you reduced or dismissed. You can count on us to support you and advocate for you during every phase of the criminal justice process in Scottsdale. Request a free case consultation by contacting us online or calling us at (480) 456-6400 anytime, 24/7.