Although the Second Amendment enables citizens of the United States basic rights to own firearms, it is state law that largely regulates the sale and purchase of guns across the country. Some states have stricter laws than others as an attempt to curb rising gun violence and death rates. However, many argue that these are largely reactionary measures that put unnecessary limitations on the right to own a gun in the United States.

Arizona also has laws in place to regulate the sale and purchase of firearms. Fortunately, they are largely unrestrictive, providing an incredibly gun-friendly landscape to residents of The Grand Canyon State.  We recently reviewed all state laws and ranked the best states for responsible gun owners, Arizona graded out as the second most gun-friendly state. 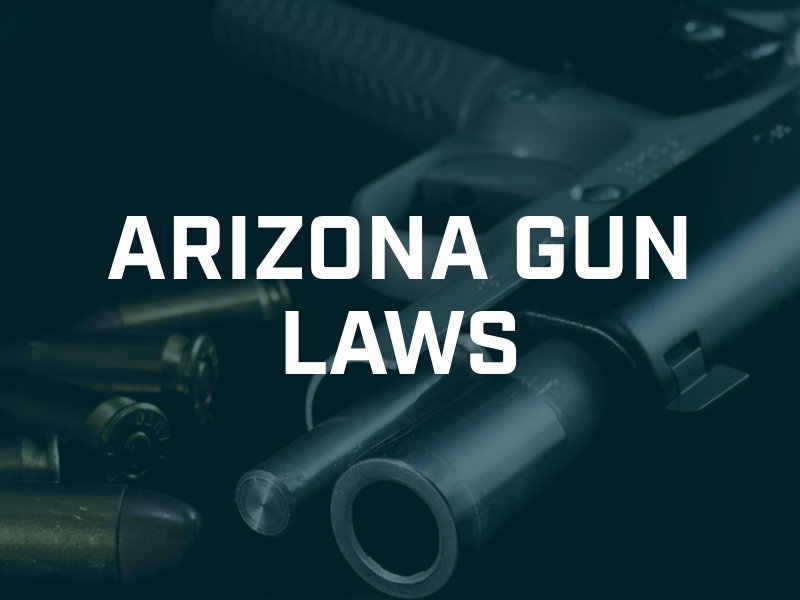 According to state law, the minimum required age to purchase and/or possess a firearm is 18 years old. However, this does not apply if the minor is accompanied by a parent, guardian, or any safety instructor who is tasked with teaching the minor proper gun safety. It is also important to note that federal law prohibits anyone under 21 years old from purchasing a handgun.

Further exceptions may apply to those who are 14-17 years of age and who are:

Laws Regarding the Sale of Guns

Arizona is one of a few states in the country that has minimal regulations and limits regarding the sale of firearms. Under state law, gun dealers are not required to obtain a state license in order to sell guns. For that matter, gun shows in the state are largely unregulated as well.

Additionally, Arizona does not require gun dealers to keep a record of sales of background checks. In 2013, the law was further amended in Arizona to prevent political subdivisions from maintaining any such records – except for the purposes of law enforcement investigation.

Similarly, there are very few laws that regulate the purchase of guns by Arizona residents. State citizens are not required to apply for any sort of permit in order to purchase firearms – and there is no waiting period between purchasing a gun in Arizona and having it in hand.

Who is Prohibited from Possessing Guns in Arizona?

It is important to note that, despite the seeming lack of gun control, Arizona does prohibit certain individuals from possessing a firearm. This includes:

Those who are disqualified from possessing a firearm may be reconsidered for a restoration of their rights, but this can vary based on the severity of the felony, the time between conviction, imprisonment, and subsequent release, and other factors. A Phoenix criminal defense attorney may be able to assist you with these matters.

Possession and Carry Laws in Arizona

A permit is not required for both the possession and carry of firearms in Arizona. Additionally, the registration of your firearm is not required – and in fact, it is expressly restricted if conducted by political subdivisions.

The open carry of firearms in public is not restricted, nor is the concealed carry of a weapon or firearm for individuals 21 years or older. However, it is important to note that Arizona still offers a state concealed weapons permit, as it can provide two benefits to gun owners:

Safety training can be completed via numerous options for firearms safety training. This can include a state-approved course, one approved by the National Rifle Association, or a hunter safety course. Prior military training or law enforcement training can also qualify as firearm competence.

Stand-your-ground laws provide citizens the right to defend themselves and others if they are under an imminent or immediate threat of violence from another party.  Arizona has two laws on the books that allow citizens to use force to protect themselves.

ARS 13-404  allows the use of threatening or physical force in self-defense.

…a person is justified in threatening or using physical force against another when and to the extent a reasonable person would believe that physical force is immediately necessary to protect himself against the other’s use or attempted use of unlawful physical force.

While ARS 13-405 allows the use of deadly force if necessary and that there is no duty to retreat.  Specifically, Arizona’s stand-your-ground law states:

“A person is justified in threatening or using deadly physical force against another:

1. If such person would be justified in threatening or using physical force against the other under § 13-404 , and

“A person has no duty to retreat before threatening or using deadly physical force pursuant to this section if the person is in a place where the person may legally be and is not engaged in an unlawful act.”

In other words, a citizen has the right to use deadly force if they are justified in protecting themselves against another party’s use of unlawful force.

Unlike other states, Arizona largely has little to no legal limits regarding the possession and purchase of certain firearms and gun accessories. This includes no ban or limit on:

There is little regulation on the sale of ammunition in the state; Arizona only prohibits the sale of ammunition to minors under 18 without express written consent from a parent or a guardian. Additionally, the possession and purchase of a machine gun is only prohibited if any of the resultant transactions (possession, transfer, manufacture) is not compliant to federal laws.

It is important to mention that some of Arizona’s largest counties have enacted resolutions to declare themselves Second Amendment sanctuary counties. These resolutions were passed in an effort to wholly reject any stringent gun laws or gun control measures that infringe on the Second Amendment rights of citizens. This can include universal background checks, red flag laws, assault rifle bans, and more.

In Arizona, 6 of 15 counties have declared themselves Second Amendment sanctuary counties:

Because these resolutions are fairly recent, the legality of them remains to be seen. However, in Arizona these are largely symbolic measures, as the state has fairly little in the way of regulations that infringe on the Second Amendment rights of its residents. The Phoenix firearms defense lawyers at AZ Defenders are happy to discuss such matters in greater detail. Contact us online or call (480) 456-6400 today.